The Tiefburg („Low Castle“) gets its name from its geographical position. In contrast to high castles built on the crown of a hill or on a hillside, it is in the valley or lowland, and as a moated castle once had a moat filled with water to protect it. The moat used to be much deeper than the present ditch and the water came from a nearby mill stream, which now flows under the road by the castle.

It is not known exactly when the Tiefburg was built or by whom. It is assumed that it was built in the 12th century, possibly by the Abbey of Lorsch or the Count Palatinates of the Rhine (later known as the Prince Electors of the Palatinate). It is also possible that the castle had its origins in a fortified estate, inhabited by unfree knights, known as ministeriales, who were in the service of the Abbey of Lorsch.

The dynasty died out when the last knight of Handschuhsheim, Johann (Hans) V, died aged just 15 ½ on 31st December 1600 from injuries sustained in a duel. Through inheritance, the Tiefburg became the property of the barons (later counts) of Helmstatt in 1623.

Handschuhsheim and the Tiefburg were badly damaged in the Thirty Years’ War. The French Viscount Turenne had the castle sacked in 1674, and on 31st January 1689 it fell victim to the War of Palatine Succession, when the French General Mélac had the village of Handschuhsheim laid to waste and the Tiefburg destroyed completely. The Helmstatts built a new residence in the immediate vicinity, on the site of what is now the restaurant „Helmstätter Herrenhaus“. The original gate of this new residence still exists.

In 1770, the remains of an entombed knight in full armour were found in what had been a sealed niche until then, next to the staircase leading to the castle dungeon. It is not known whether this entombment was a punishment or a special form of burial.

It is said that the body of the unknown knight turned to dust when the wall was opened. The suit of armour made its way into the antiques collection of the Prince Electors, but was lost over time. In 1977, a replacement suit of armour was placed in the niche below the former castle chapel. 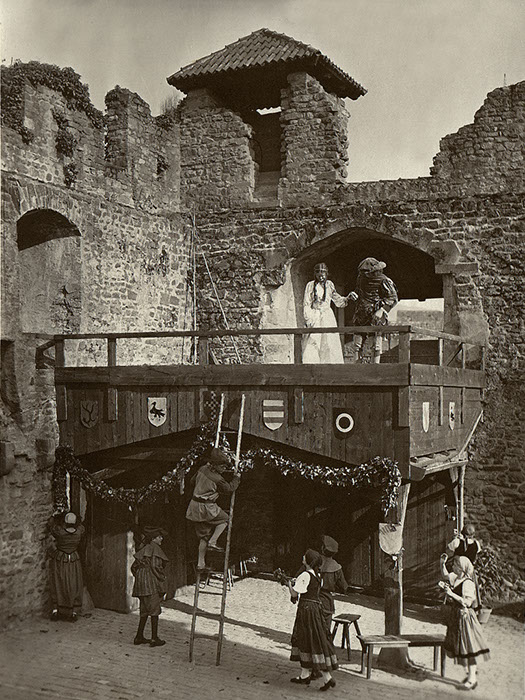 The Tiefburg owes its current appearance to the restoration work carried out by Count Raban von Helmstatt in the years 1910 to 1913, after which the castle was then let to the town of Heidelberg. A youth hostel was opened in the neighbouring Schlösschen in 1921 and rooms in the Tiefburg were also used as part of the youth hostel. The room now called the Knights’ Hall (Ritterstube) was a dormitory with 24 beds and bicycles were parked in the cellar.

In 1950, Count Raban’s son Bleickard sold the Tiefburg to the town of Heidelberg for the sum of 35,000 Marks. The town then passed on responsibility for its administration and use to the Stadtteilverein Handschuhsheim (district society). Since then, the Tiefburg has provided the romantic backdrop for a whole range of events organized by the different societies in Handschuhsheim and it plays a central role during the annual three-day fair known as „Hendsemer Kerwe“. The partially galleried courtyard and the conversion of rooms in the cellar and castle residence have helped to make the Tiefburg an extremely popular event location.

A men’s society called „Schlaraffia Haidelberga“ holds its regular meetings in one of the large vaulted cellar rooms. The Stadtteilverein has its offices and archives on the upper floors of the castle, accessed by a wooden staircase on the outside of the building.